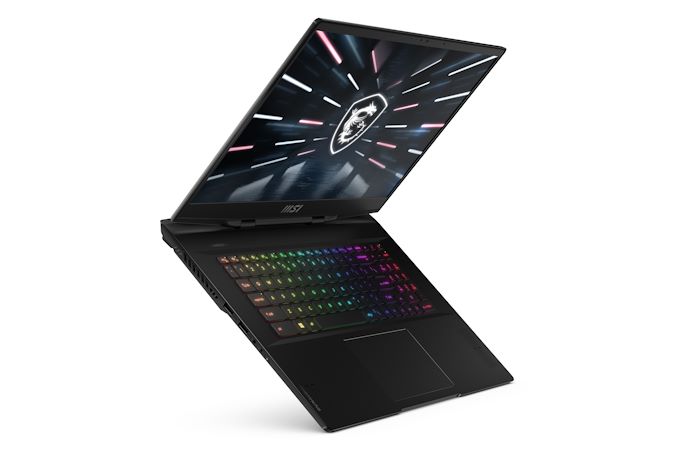 With the announcement of Intel’s Alder Lake H series of laptop processors, MSI is one of the first out of the gate to announce their refreshed gaming laptop series featuring the newest Intel processors. As one of the market leaders in gaming notebooks, MSI has some new tricks up its sleeves to boost performance even further.

New this year for MSI are some key software features to boost performance across the lineup, as well as functionality. As an example, MSI will offer a new Smart Auto Power system to adjust the laptop performance levels based on what application is running, rather than relying on the end user to configure the settings manually. For users that want to tweak their own system, the manual system will of course still be around, but the automatic mode should help consumers who are not as familiar with the product get the most out of it, or those who just don’t want to have to fiddle with things to get the best out of the laptop.

Also in line with power and performance, MSI has always offered a “Silent” mode on their laptops which has targeted keeping the fans at 15 dB to prevent unwanted noise intrusions while working. Their new software update will leverage the system microphone to measure the ambient noise level in the room, which will then let the Silent mode use more system cooling without being audible. Although this may not sound like much, MSI has found up to a 30% boost in performance in their Silent mode while still not being audible.

MSI will also include background noise cancellation on incoming audio calls, rather than just the outgoing audio stream, so if your co-worker has a noisy dog in the weekly team meeting, it at least won’t bother you anymore.

All three of these features will be available across the lineup. Let’s take a look at the refreshed products. 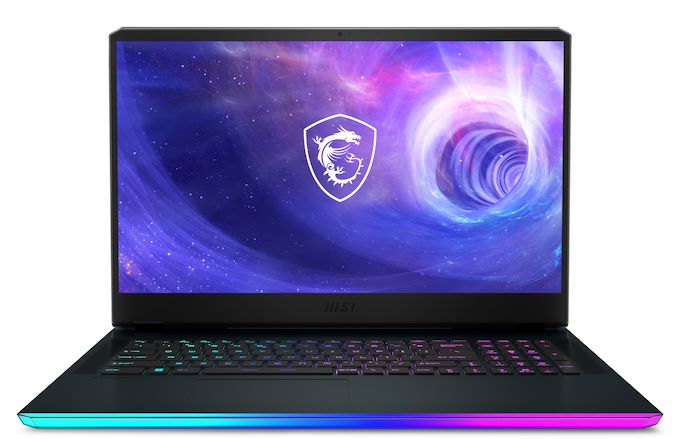 At the top of the product stack is the 17” Raider 76 series and 15” Raider 66 series, and the first change for those familiar with MSI’s lineup is the name itself. For 2022, MSI is reversing the name from GE76 Raider to Raider GE76, with the goal of dropping the code names from their products to simplify the shopping experience for their customers, which I think makes a lot of sense.

New for this year is a Phase Change thermal pad which is solid at room temperature, but when it reaches 58°C the pad melts and fills the spaces between the CPU and thermal block for a more efficient transfer of heat. MSI is claiming up to 10% more performance over traditional thermal pastes and liquid metals, without the crystallization issues that can occur. The new phase change thermal pad will be available on both the Raider and Stealth with Intel processors.

Speaking of Intel processors, the Raider lineup offers the latest Alder Lake H lineup, with the i7-12700H and i9-12900HK overclockable processor on tap. With the shortage of DDR5, MSI is unfortunately stuck with a situation where the memory available is not uniform across the range, but the Raider comes out in the best shape with only the lowest-tier GE76 model with a Core i7-12700H and RTX 3060 offering DDR4. The rest of the lineup is all DDR5-4800 memory, including all current models of the GE66 being announced.

On the graphics side, which is always critical in a gaming notebook, MSI is turning to the latest refreshed RTX cards from NVIDIA, up to the RTX 3080 Ti Laptop GPU which is the new king of the hill in terms of laptop graphics. The 3080Ti Laptop will be paired with 16 GB of GDDR6.

The Raider GE76 and its smaller GE66 cousin have not changed on the chassis side. We just reviewed the latest 17.3-inch Raider laptop so for a feel for the chassis, please check out that review. It is very good, albeit a bit flashy, and being at the top of the MSI lineup (at least until they decide to bring back the Titan) it is very fast. MSI expects their Alder Lake models with their new cooling solutions to be the most performant of the current generation of gaming notebooks on the market. 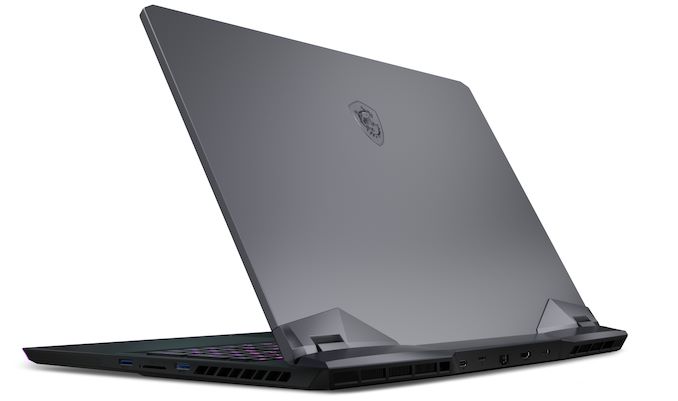 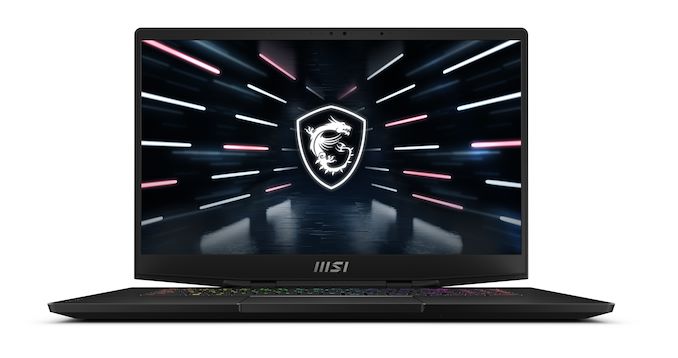 If you want performance, but want a bit less bling, MSI has you covered with their aptly named Stealth lineup. The chassis has been reworked to make it more durable, and it packs a lot of performance into a relatively small and light design.

MSI has moved the hinge to the middle of the notebook to increase its durability, and the notebook offers a CNC milled aluminum display cover. The notebook is all black to blend in for work and play. 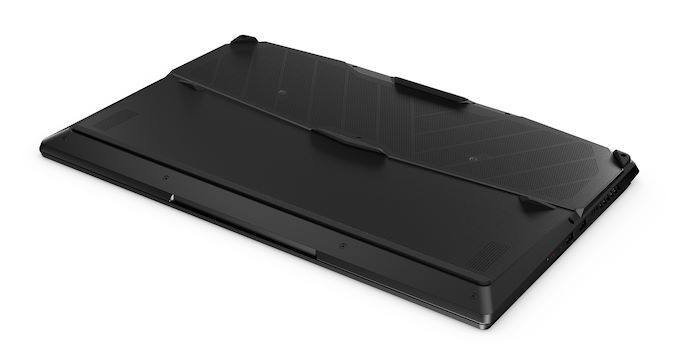 MSI is offering a Full HD webcam, which helps with the business side of this device, as well as a hard switch for the webcam on the side of the device. Sadly, most notebooks still offer 1366x768 webcams still, or some gaming notebooks forego the webcam altogether, which seems like a mistake in 2022. MSI also includes a fingerprint reader for quick logons.

The keyboard has been revamped, and the keys are 8% larger than the previous generation. User feedback on the previous design was that the touchpad was not tall enough to move the cursor from the top of the display to the bottom in one stroke, so MSI has also make the touchpad taller to remedy this. MSI also moved the most important ports such as power and USB to the rear of the device to allow for better cable management.

The Stealth is a thinner and lighter design, but still packs in plenty of performance. The 17-inch 5.7 lb laptop is over 3 lbs lighter than the Raider series, making it much more portable, and the 15-inch model is 4.63 lbs, which is about 2.5 lbs less than the 15-inch Raider. 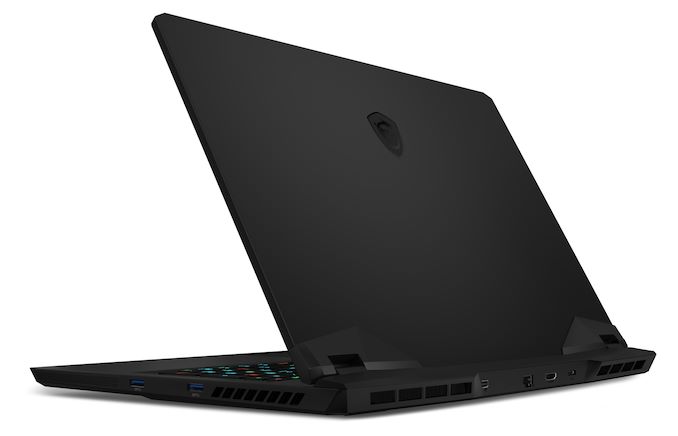 If you like the bigger desktop replacement style devices but don’t like the RGB, MSI offers the Vector series as a more affordable Raider. The Vector lineup will also get the latest Alder Lake processors, from the Core i7-12700H to the Core i9-12900HK. Due to supply, the Vector will forego DDR5 and stick with DDR4, with up to 32 GB from MSI via two SODIMMs. On the graphics side, options are the RTX 3060L, RTX 3070L, RTX 3070L Ti, and RTX 3080L. 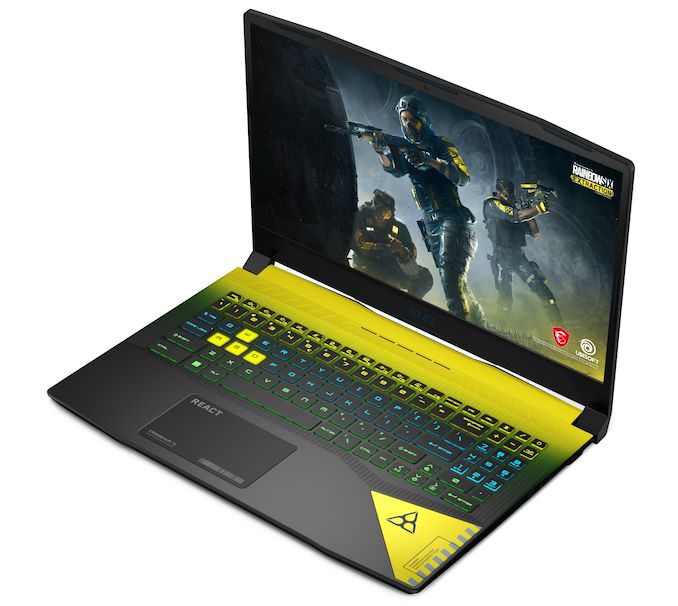 Every year, MSI does a special edition laptop which is usually from the Raider series, but for 2022, MSI is using a mid-level gaming notebook to make it more affordable for more people. Themed for Ubisoft’s Rainbox Six Extraction, the laptop features a unique paint scheme and even comes with a copy of the game. It features a map of Los Angeles under the logo, and features laser engraving throughout the design. It comes with a matching mouse and mouse pad as well. The special edition laptop will be available for $1999 USD.