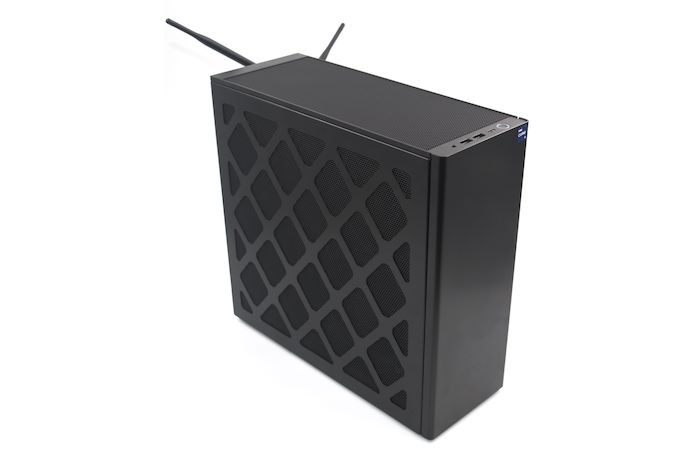 The Intel NUCs started off in the early 2010s as ultra-compact form-factor boards / systems. The systems were meant to replace bulky tower desktops in applications where the physical footprint and system capabilities were significantly more than the actual requirements. The success of these UCFF systems has allowed Intel to slowly expand the product line to include a wide variety of form-factors.

Systems targeting the enthusiast and professional gaming (e-sports) markets require the integration of a discrete GPU in the system, and this has driven the development of NUC form-factors beyond the initial UCFF push. The Enthusiast NUCs integrate a discrete notebook-class GPU on the board, while the Extreme lineup allows end-users to install a discrete GPU of their own choice. The Raptor Canyon NUC13RNGi9 we are looking at today belongs to the latter family.

Earlier this year, Intel had launched the NUC12 Extreme Dragon Canyon with a 65W desktop Alder Lake CPU. Within a couple of quarters, they teased the NUC13 Extreme based on the recently-introduced Raptor Lake processors, with the promise of an imminent launch. The company kept its word with the announcement of a number of NUC13 Compute Elements and NUC13 Extreme Kit SKUs last month. Today's review takes a detailed look at the industrial design of the new NUC13 Extreme, provides some insights into the system configuration, and presents benchmark numbers encompassing a wide variety of use-cases.

Intel supplied us with an engineering sample of the flagship Raptor Canyon SKU - the NUC13RNGi9 sporting the NUC13 Extreme Compute Element (NUC13SBBi9). This Compute Element (Shrike Bay) is housed in a cuboidal 337mm x 317mm x 129mm chassis. We see a significant increase in volume (from 8L to 13.7L) compared to the Dragon Canyon NUC. This is still well within the realm of small form-factor (SFF) PCs - an adult can lug around the unit to LAN parties, if necessary. Other desirable SFF aspects such as the in-built PSU are carried over from the previous generation Extreme NUCs.

Intel's NUC lineup has traditionally included board and kit variants, allowing its partners to provide value additions (such as a passive chassis or additional I/O ports in the end system). Kits (other than the ones that come with a pre-installed OS) require the end-user to add storage, DRAM, and install an OS to complete the system. Intel plans to sell three varieties of the Raptor Canyon NUC Kit - the NUC13RNGi7 and the NUC13RNGi5 (equipped with the Core i7-13700K and Core i5-13600K respectively) in addition to the NUC13RNGi9 we are looking at today. However, OEMs and end-users can also build their own NUC13 system based on the following components:

An off-the-shelf Raptor Canyon NUC13RNGi9 kit leaves only the DRAM, non-volatile storage, and discrete GPU to the choice of the end-user. Even though the Compute Element sports a LGA1700 socket, the three Compute Elements being sold in the market as part of the kit version come with the processor pre-installed (Core i9-13900K, or Core i7-13700K, or Core i5-13600K). Prior to the platform analysis and overview of our review configuration, let's take a look at the pre-decided components in the above list.

The NUC13RNGi9 we are reviewing today comes with the NUC13SBBi9 NUC13 Extreme Compute Element. It comes with a socketed LGA1700 processor - the Core i9-13900K. This belongs to the Raptor Lake (13th Generation) family and has a 8P + 16e / 32T configuration. The processor base power is 125W, but the thermal design of the Compute Element as well as the chassis allows Intel to configure the processor with a PL1 of 150W and a PL2 of 250W (with a tau of 28s). It can turbo up to 5.8 GHz. 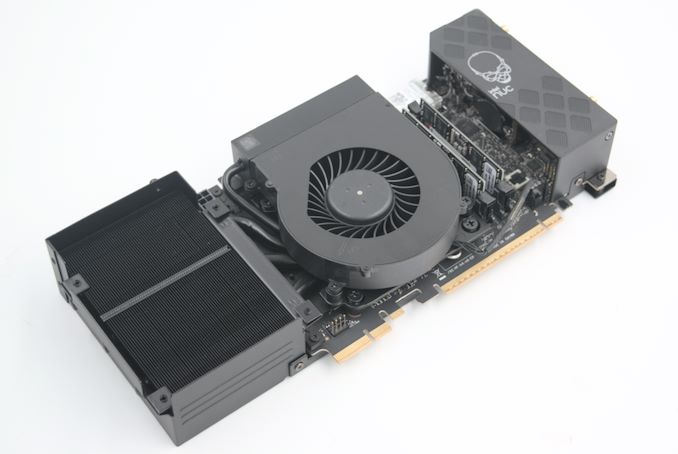 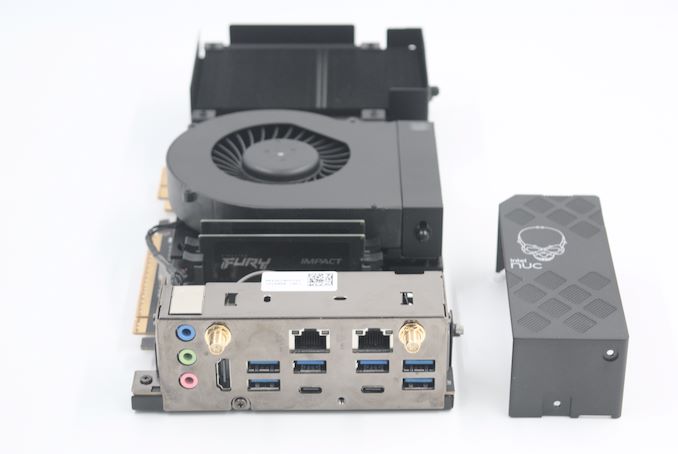 The baseboard for the NUC13RNGi9 is a complete re-work over the Eden Cove used in the Dragon Canyon NUC. Intel has pushed out functionality such as SATA ports and USB headers into the baseboard in the new version. One of the key physical changes is the placement of the add-in card slots for the Compute Element and the discrete GPU on different sides of the baseboard. This allows the Compute Element to be mounted on top, and the discrete GPU of similar width to go under it. 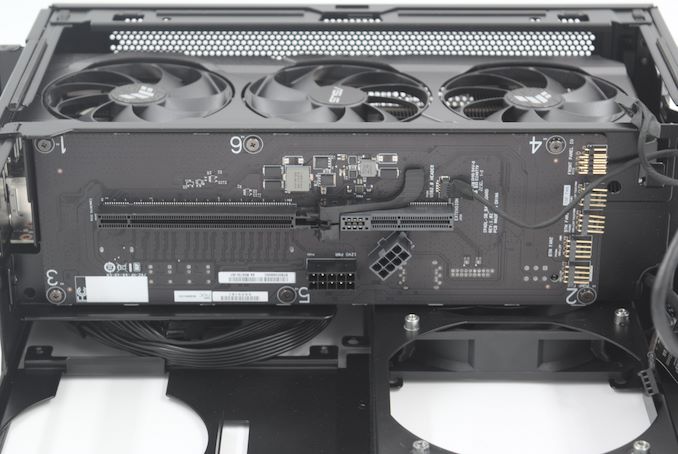 The PCIe lanes are Gen 5, and do not have bifurcation support, similar to Eden Cove.

The NUC13RNGi9 chassis has a much improved ease of installation compared to the previous generation NUCs. The dimensions allow the installation of triple-slot GPUs up to 317mm in length. The PSU also sees an upgrade, moving to a 750W modular one (compared to the 650W version seen in the Dragon Canon NUC), while retaining the 80+ GOLD rating. 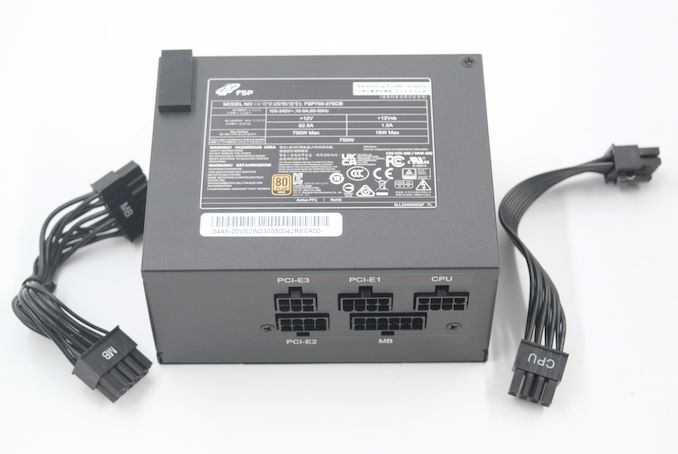 Unlike the non-intuitive hinge-based design of the previous Extreme NUCs, opening up the Dragon Canyon NUC is straightforward - taking out a couple of screws and sliding out the top and perforated side panels prior to popping out the Compute Element. The thermal design works by pulling in air from the left, allowing it to go over the heat-sink hanging off the edge of the Compute Element and exit on the other side. 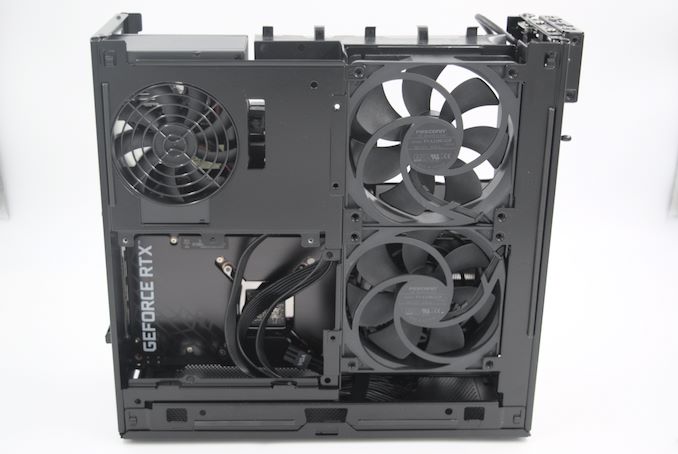 The SSD slots can be accessed on the rear of the Compute Element. As the chassis fans / shroud blocks access to the Compute Element's rear, it becomes mandatory to get the Compute Element out of the baseboard to install M.2 SSDs. There are two horizontal slots that are off the chipset, while the vertical one is the CPU-attached NVMe-only slot. 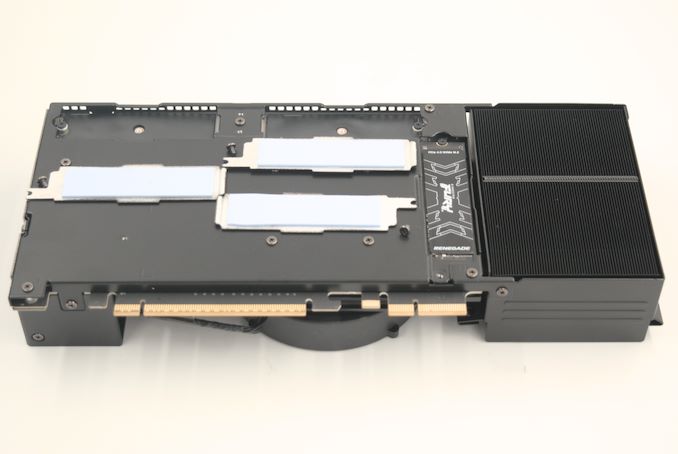 The SODIMMs can be installed without taking the Compute Element out of the baseboard. Baseboard features such as the dGPU slot and SATA ports / other headers can be found on the underside - the Compute Element itself doesn't need to be removed to get to them. GPU installation is much simplified without having to cram it into a tiny space shared with the Compute Element. The freedom also ends up giving plenty of airflow space for the discrete GPU.

The extra room also ensures that the cables connecting the high-speed I/Os on the daughterboard to the Compute Element are not easily dislodged. That was one of the main complaints I had with the previous Extreme NUCs - reinstalling or swapping GPUs would result in the front USB ports operating in USB 2.0 speeds. Fortunately, the Raptor Canyon NUC completely avoids those types of issues, thanks to the redesigned chassis. The I/O ports are also no longer recessed, allowing for easy access during day-to-day use. 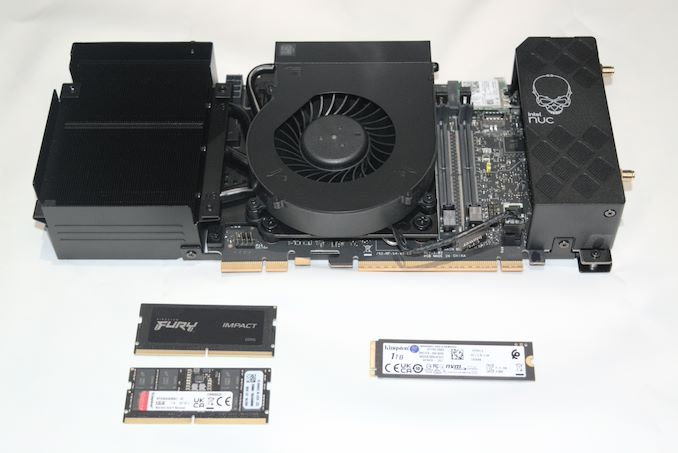 The configuration of our review sample of the NUC13RNGi9 was completed with the following components: 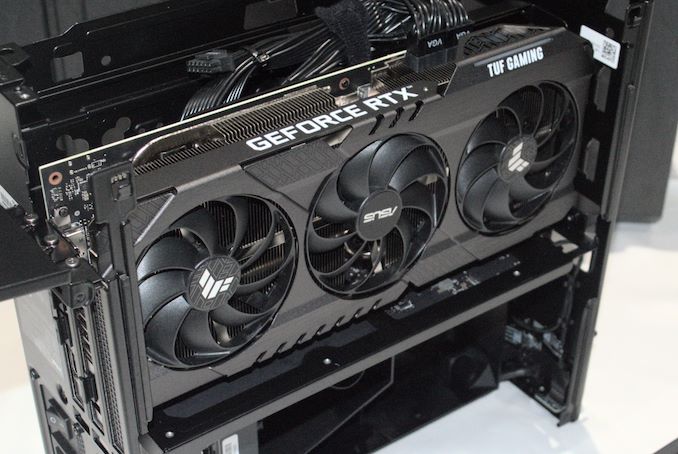 The ability to support a powerful GPU like the RTX 3080 Ti means that the Raptor Canyon NUC should easily be able to compete against massive gaming rigs. For now, we restrict ourselves to comparing it against the previous generations of Extreme NUCs. In the next section, we take a look at the full specifications of our review sample, followed by a detailed platform analysis along with some notes on our setup experience.