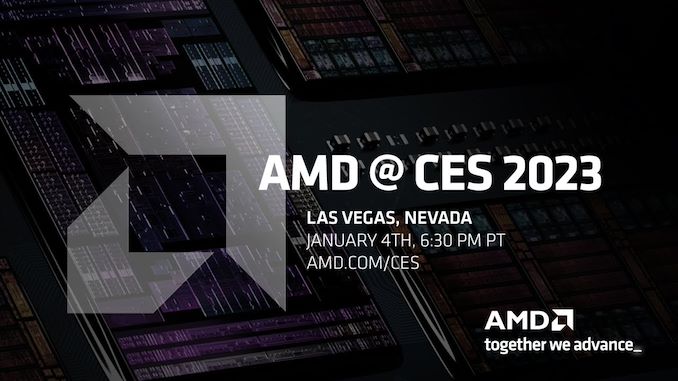 09:28PM EST - CES keynote season continues this week with the second major PC-centric keynote of the event, being held by AMD. Helmed as always by CEO Dr. Lisa Su, AMD is taking the center stage this evening to share their plans and products for consumer electronics for 2023. AMD is in the midst of rolling out their Zen 4 CPU architecture and RDNA 3 GPU architecture across their product lines, so there's ample space in both AMD's desktop and mobile product lineups to introduce some new parts – and we don't expect to come away empty-handed

09:29PM EST - I'm told that this will be a truely live presentation - not a pre-recorded video - which will make it the first live AMD keynote since before the pandemic

09:30PM EST - This should run for an hour. And judging from past AMD CES keynotes it should be packed with announcements

09:30PM EST - Though the live format will hopefully mean it runs at a bit more moderate pace

09:31PM EST - It also means there's a chance it could go a bit long. Or start a bit late, as would seem to be the case here. But such is the nature of live presentations

09:32PM EST - Speaking broadly based on announcements and meetings for this year's show, the PC presence as CES 2023 looks to be only light-to-modest

09:32PM EST - There are plenty of laptops to show off, thanks to several companies offering new parts suitable for mobile systems

09:33PM EST - But the rest of the PC ecosystem has a lighter footprint. In part because AMD and Intel just launched their current desktop platforms a few months ago 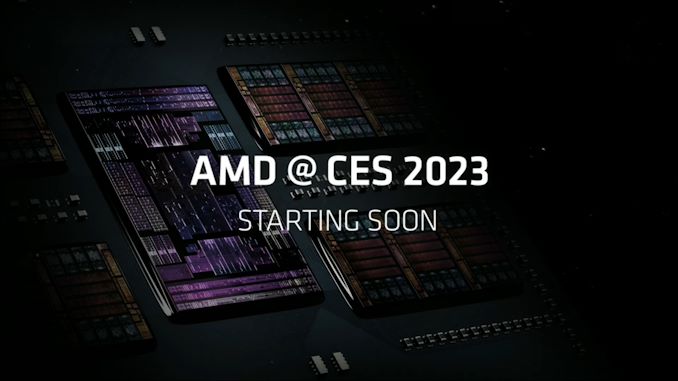 09:34PM EST - Even VESA isn't in South Hall this year. Those companies that are at the show are increasingly doing private suites for smaller audiences 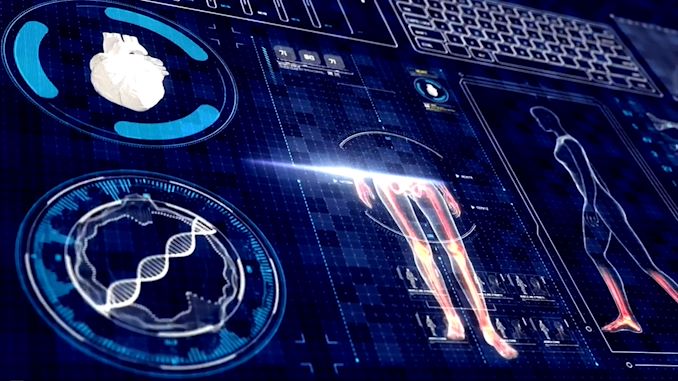 09:36PM EST - Looks like this is a generic CES bumper, rather than an AMD video

09:36PM EST - And speaking of CES, first on the stage is the CTA chairman, Gary Shapiro 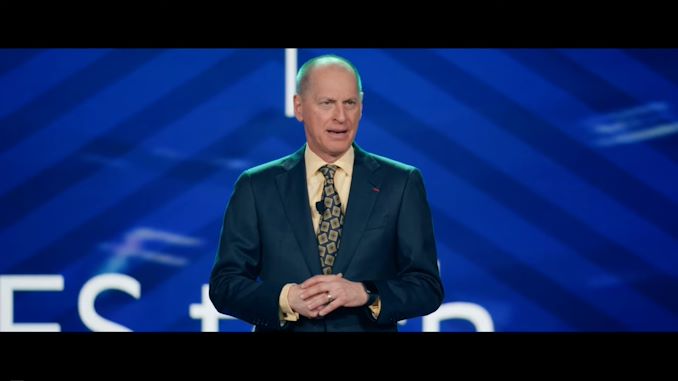 09:37PM EST - Gary is talking briefly about AMD, and how things have changed since the pandemic

09:38PM EST - (The pandemic still weighs heavily on CES; attendance is still around half it was at its peak in 2020)

09:38PM EST - And now talking about Dr. Lisa Su and her many accomplishments

09:41PM EST - Lisa welcomes the crowd and talks about how wonderful it is to be here in person

09:41PM EST - This is THE official opening keynote for CES. The one Microsoft used to helm for a very long time. It goes to show how things have changed

09:42PM EST - AMD wants to push the envelope on high performance computing and other technologies

09:43PM EST - "AI is truly the most important megatrend for tech"

09:44PM EST - Starting with a brand new accelerator, based on XDNA

09:44PM EST - The first use of the XDNA architecture will be in notebooks

09:45PM EST - This is AMD's next gen processor for notebooks

09:45PM EST - It sports a dedicated AI engine called Ryzen AI, based on the XDNA architecture

09:46PM EST - Claiming it's faster than Intel and Apple

09:47PM EST - AMD is claiming 30 hours of video playback battery life on the 7040 series thanks in part to TSMC's 4nm process

09:50PM EST - Microsoft, of course, is a key partner for AMD. Without Windows, there's arguably no market for x86 CPUs

09:51PM EST - Talking about current AMD-powered products, such as the Xbox Series X|S

09:53PM EST - Microsoft wants to use every TOP that AMD can put on a chip

09:54PM EST - Talking about Window Portrait Studio effects as an example of functions that can be AI-accelerated

09:54PM EST - Moving it to the Ryzen AI engine offers better performance for this effects at a fraction of the power

09:54PM EST - And it frees up the CPU cores for other things

09:55PM EST - "Just like the mouse helped reinvent the GUI, [...] AI is going to reinvent how you do everything on Windows. Quite literally"

09:56PM EST - The models are so useful but compute intensive that Microsoft hasn't been able to do it before

09:56PM EST - "It's going to require an OS that blurs the line between the cloud and the edge"

09:56PM EST - And that's Panos. Lisa thanks him for the partnership

09:56PM EST - Now moving on to the subject of hybrid work

09:57PM EST - Employees like working from home. But connectivity issues present them problems

09:57PM EST - Online meetings never go quite as well as they should

09:58PM EST - Enrique is talking about how quickly things have changed with remote work

09:59PM EST - Making opportunities for disruption and for innovation

10:02PM EST - HP has integrated the experiences that customers are demanding

10:02PM EST - And Lisa talks about the benefits of closely optimizing hardware and software together

10:02PM EST - HP will have a full portfolio of Ryzen Mobile 7040-powered devices in the spring

10:03PM EST - AMD has great Ryzen and Radeon products for gaming. Not to mention the AMD-powered consoles

10:04PM EST - Recapping the products they launched in the last few months

10:04PM EST - A number of mobile and desktop products to talk about

10:08PM EST - Lenovo is arguably one of AMD's closest OEM partners. They've been willing to use AMD's products at times when other OEMs have not

10:09PM EST - Tomorrow Lenovo will be introing their next generation of Lenovo Legion gaming laptops

10:16PM EST - And new 65W CPUs. And new entry-level AM5 motherboards to give AMD an edge at every price point in the market

10:16PM EST - Now on to the subject of adaptive computing

10:17PM EST - Now AMD is going to put their FPGAs to use for adaptive computing

10:17PM EST - Talking about the use cases for the hardware. Starting with health care

10:18PM EST - (These blue suits are perhaps not the right shade of color for being on AMD's stage)

10:18PM EST - Intuitive works at the intersections of health care and robotics technology

10:21PM EST - Enabling surgeons to see more and do a better job

10:22PM EST - Intuitive can use the same parts across multiple platforms by changing their programming/design

10:23PM EST - And improved robotics can in turn result in better diagnostics and treatments

10:25PM EST - Rolling a video from another AMD partner: Clairis

10:28PM EST - AR and VR are two very different techs and use cases

10:30PM EST - Lisa reiterates the virtue of optimizing silicon, systems, and software together

10:32PM EST - Talking about a use case for the Magic Leap with medical imaging

10:32PM EST - Now certified for use in operating rooms

10:32PM EST - What's next? Growing the content ecosystem. And then make is smaller (just glasses would be ideal)

10:33PM EST - Offloading the compute required for AR off to other computers

10:34PM EST - "AMD has also been a trusted partner in aerospace for decades"

10:36PM EST - Dr. Coleman is talking about some of her missions and what she did. Living on the ISS, deplying telescopes, etc

10:36PM EST - (This is another field where AMD has inherited a lot of presence via Xilinx)

10:40PM EST - It was a successful mission. The next one will have humans aboard

10:45PM EST - One final area of the night: sustainable computing for datacenters

10:45PM EST - All the big datacenter players are using AMD in some fashion these days

10:48PM EST - Which is a huge advantage to datacenter operators in terms of CapEx and OpEx

10:50PM EST - Talking up the performance advantage versus NVIDIA's T4

10:51PM EST - Now talking up the Frontier exaflop supercomputer, which is powered by AMD processors

10:51PM EST - AMD has been working to develop the first chip that brings together a datacenter CPU and GPU and memory into a single design

10:52PM EST - 3D stacking to put multiple CPU and GPU chiplets on top of a base die

10:53PM EST - The most complex chip AMD has ever built

10:54PM EST - AMD is looking to bring model training from months to weeks

10:54PM EST - Currently in the labs, and sampling to customers shortly. Coming to the market for HPC and AI solutions in the second half of 2023